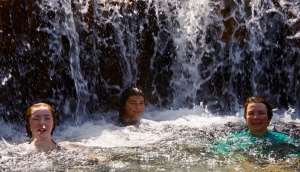 The Northern Territory has a plethora of beautiful waterfalls that change dramatically in volume from the wet to dry season. We spent 2 days in Litchfield National Park, enjoying the various waterfalls and pools and marveling at the cathedral, tree piping and magnetic termite mounds, the latter resembling haphazard tombstones.

Mataranka, an hour south of Katherine, has relaxing thermal pools, and Edith Falls, 60 km north of Katherine, provides a stunning setting for swimming at the upper and lower falls. It is strange for us that the water temperature at the waterfalls is so pleasant for swimming when we are used to braving much colder water when swimming outdoors, e.g. Horseshoe Lake in Jasper. Indeed, the outdoor pool in Katherine is almost uncomfortably warm for swimming laps. The Katherine Hot Springs have replaced Binalong Bay as our excursion once Paul’s work day is over. It is great being able to walk to the springs and the water there is friendlier than the ocean. However, we have to share the springs with many more people and the scenery, while pleasant, is not take-your-breath-away like Binalong. However Nitmiluk Gorge is only 30km away and we have enjoyed a sunrise cruise along the Katherine River as well as a hike along part of the rim.

The girls and I booked a cultural experience one morning in Katherine. Trying our hand at painting under the direction of Manuel, an Indigenous artist, we gained a much greater appreciation for the skills and techniques involved. Our efforts at lighting a fire the traditional way were ineffective whereas Manuel started a fire in less than a minute. We also failed at throwing a spear with a woomera. Although Manuel’s parents had come from Arnhem Land, he has never been there himself and it seems very unfair that the girls and I have. The interesting morning ended with the girls cuddling wallaby joeys that had been rescued by the couple who organize the cultural experience. The girls also spent a morning doing some weaving at an Aboriginal-run art gallery. 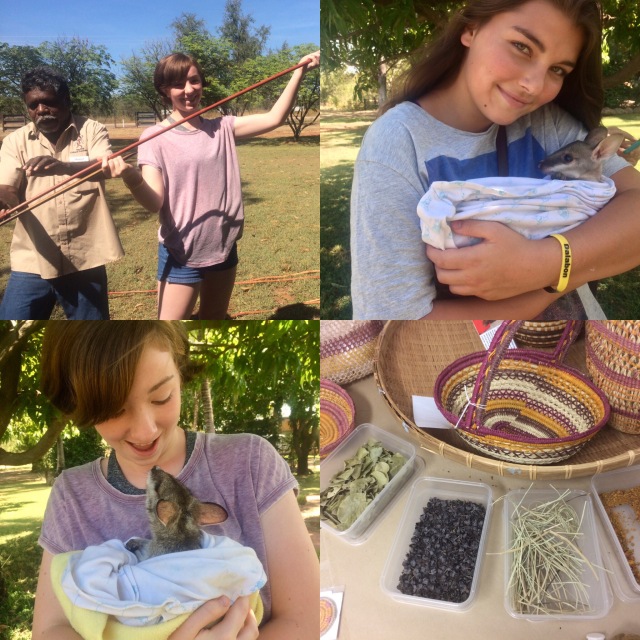 Whereas when we did weaving in Uganda we used purchased raffia, Dorothea taught the girls using pandanas leaves she had dried and dyed in the traditional way. It is reassuring to see that some of the Aboriginal traditions and languages are persisting but distressing to see that, as in Canada, Aboriginals rank lower than the general population in measures of health, education, and income. In his book The Great Race David Hill describes the separate expeditions by the Frenchman Nicolas Baudin and the Englishman Matthew Flinders to map the entire coast of Australia. Baudin was incredibly prescient for stating to King, a governor of the English colony, “To my way of thinking, I have never been able to conceive that there was justice or even fairness of the part of Europeans in seizing in the name of their governments, a land seen for the first time, when it is inhabited by men who have not always deserved the title of savages or cannibals that has freely been given them; whereas they were still only children of nature and just as civilized as your Scotch Highlanders, or our Breton peasants, etc., who, if they do not eat their fellow-man, are just as objectionable.” In 1802 he predicted that assimilation would not work and the marginalization that is present today confirms it. I don’t have any answers but we have at least tried to support the Aboriginal-owned businesses while we have been in Katherine.

War memorials in Australian towns and cities are well maintained and visited. However, in the Northern Territory, there are many actual sites pertaining to WWll. We did not get to the war museum in Darwin but did go to the Bombing of Darwin experience on Stokes Wharf, which gives a very vivid representation of Feb 19, 1942 – the day Darwin was first bombed. Well vivid for everyone except Lori who didn’t realise her VR goggles weren’t working except right at the end. Darwin was bombed on 64 occasions and even inland sites such as Katherine were bombed. En route between Darwin and Katherine there are several WWll air strips. The war cemetery at Adelaide River an hour north of Katherine is the fourth largest in Australia. We were moved viewing the grave of the sole Canadian soldier buried there as well as those of other soldiers and civilians killed during WWll. Katherine itself was basically taken over by the military in WWll and the hospital moved and expanded to over 800 beds. The site of the officer’s mess hall later became a family home and is now a National Trust site. There continues to be a Royal Australian Air Force (RAAF) base near Katherine, named after Archie Tindal, the first RAAF member killed on the Australian mainland by the Japanese in WWll. We often hear the F/A-18 Hornet jets training overhead and the Air Force members are distinctive in their blue camouflage when they are running errands in town. My great uncle Wilfred Schrempp was posted to Australia as a communications technician in WWll. I am keen to find out where exactly he was stationed as no relative still living seems to know for certain (I have to request his records in writing from the office in Ottawa so will do that when we return.)

Paul and I wandered over to the local footy oval on a Friday night – still 25 degrees at 7:30 pm. The games were free-flowing and exciting to watch. While the teams were not very mixed racially, we were pleased to see that no team had obviously inferior gear on contrast to our experience of watching soccer in Zimbabwe.  It was fascinating to hear the Indigenous players conversing in their own language.

In just over 5 months in Australia we have been to mass in 11 different churches ranging from cathedrals in Bunbury and Darwin to a corrugated iron church in Adelaide River. People have been very friendly, twice we have doubled the congregation, and one priest even congratulated Paul and I on our anniversary (apparently I look like one of the teachers at one of the schools).

We have delved into the Australian music scene a bit. Our friend Sue introduced us to the music of an undefinable band The Northern Folk (her nephew from Albury is one of the members). It is an 11-piece group with sassy sax, brash brass, and exquisite harmonies (thenorthernfolk.com.au). When we were in Echuca, we listened to some songs of Isaiah Firebrace, a teen from Moama who won the 8th season of the X Factor Australia in 2016 and was Australia’s contestant in the Eurovision 2017 competition. No that is not a typo. Australians have been so engaged with the Eurovision contests that their country was given a spot. Isaiah has an appealing look and sound and we hope this is just the start of an exciting career as he could be a mentor for other Aboriginal youth (His father is Yorta Yorta and his mother Gunditjmara). While we missed out on a Jimmy Barnes concert in Launceston and did not manage to see Mick Thomas perform on Australian soil, we were very happy to hear Colin Hay (from Men at Work), Debra Conway, Joe Camilleri, and Mental as Anything perform in Darwin. The concert was sponsored by APIA and we were a little chagrined to learn it is the Australian Pensioners Insurance Agency. That was a reality check we didn’t need. On that same trip up to Darwin Lori discovered a new way to gracefully enter the water (not).

Next on the music agenda is listening to the new album from My Friend the Chocolate Cake (www.MFTCC.com). Thea is still heavily into KPop (Korean Pop), which Rachelle does not appreciate. Since the girls went to the twenty one pilots concert in Melbourne we have been listening to more of their music; this group and Ed Sheeren are two artists we all enjoy. While I remain unashamedly mired in the 80s, I do think Ed Sheeren has almost single-handedly redeemed the current decade’s musical contribution. Shania Twain, and other country music, is popular here in the Northern Territory. On a home music scene, I have not progressed much on the ukulele. However, we are thrilled that Thea has been able to continue with flute lessons from the amazing teacher in Launceston via Skype.

While we arrived too late for the fresh mango season, I am loving the frozen and dried mango we buy at the weekly Saturday market. I am a bit like Bubba and the shrimp: mango chicken, mango muffins, mango pork, mango on my cereal, and I had an amazing tropic burger at the Lazy Lizard Tavern – mango, feta cheese, beef patty, and rocket lettuce. Most innovative, tastiest burger I have eaten in years. Then just when I thought I had tried all permutations and variations of mango, I discovered mango and macadamia nut popsicles – sensational.

In some respects, Katherine has a similar vibe to FSJ – a relatively young demographic, a certain pride in being at the extreme of climate, and an agricultural/ranching community in the surrounding area. We toured the Katherine School of the Air one day, which meets the educational needs of students on remote cattle stations and islands of the Northern Territory as well as children of Northern Territory families travelling or working overseas. Coincidentally one of the teachers at the school had spent 4 summers working on ranches near my home town of Pincher Creek. Paul teases me about how I strive to find someone that I know in common with any new person I meet but this instance seemed particularly unlikely. 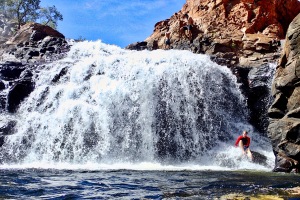 Paul’s back and leg pain are gradually resolving, although the day shift followed by three 10-hour night shifts was very tiring for him. He feels he is too old to do night shifts and was relieved that he wasn’t scheduled for any others when the latest roster came out. He no longer needs his walking stick, is able to walk more fluidly, and finds that he simply gets tingling and a mild ache in his leg when standing. He is finding the Katherine ER staff excellent to work with and appreciates having other docs around to bounce thoughts off and that transferring a patient out tends to involve a laconic discussion with an agreeable specialist in Darwin rather than the sales pitch that he often has to make when trying to convince reluctant specialists in Vancouver, Prince George, or Edmonton to accept a patient. 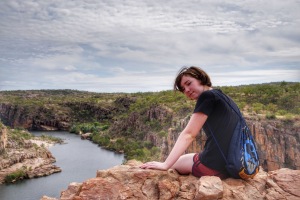 Thea is relieved to be finished her distance education courses through SD 60. This option worked well for her and she had very supportive teachers. She plans to fill in the rest of her days putting together two videos pertaining to our trip. Rachelle had more difficulty completing courses because hers were more content-heavy and she learns better as part of a group (and not with her parents as teachers!).

Schoolwork aside, she kept us entertained along the way with her handstands in freaky places (I usually couldn’t watch) and her canny imitations of accents, particularly the ones on Tasmanian TV commercials. They have coped remarkably well with living out of a suitcase, although they are very fed up with their current clothes despite a few additions and deletions along the way (often inadvertent on Thea’s part: two hosts have graciously forwarded items of clothing she left behind to Katherine.)

The girls and I have only I week to go in our gap year because we are heading back to Canada a bit sooner than Paul; he is staying on until the end of June. We are pleased to have a final visitor, a long-term friend who is flying up from Adelaide. We are all looking forward to being “home” even though we are actually home-less. As well we are all looking forward to catching up with friends and family as we try to reset ourselves back to a routine in the northern hemisphere.

6 thoughts on “Waterfalls and Water-fails”