Our time in Australia is half over and I have a confession to make. What I thought was just going to be a brief summer fling has blossomed into a mature love affair with Tasmania. Warning: extended metaphor ahead. We have been fortunate to live in several quite different places and they have all held their particular appeal for me. No feeling is the same as the adolescent rush I get when I am travelling back home to southern Alberta. The visceral response I have starts about Claresholm, heightens at Pincher Station when I can see what was my maternal grandfather’s and is now my uncle’s home, and peaks once I can see the mountains and then what was our home. Recently I had a similar reaction when a house we rented in St Helens had the same thermos I used going to elementary school.

Although the thermos was the pinnacle of 1970s ugliness, bizarrely it evoked similar feelings to seeing the landscape of my youth.

Most of the five years I lived in Edmonton revolved around the university and surrounding area so that is where my fond memories are most intense. When I first moved to Echuca after I met Paul, I was overwhelmed by the sensations – incredibly hot dry days with intense, cloudless blue sky and the intrusive forthright friendliness of small-town Australia.

After we got married we moved to England and I was amazed by the manicured landscape and ancient buildings. To me the UK was like the super popular guy at school who was good at everything and who everyone wanted to hang out with. Does one country really need a National Trust property around every corner; the countless talented scientists, authors, artists, actors, and musicians and lovely flowers and countryside? There were so many tourists and residents that I only felt I fit in or could get close to the UK in the more remote parts such as the Stiper Stones or near Clun in Wales. Fort St John, in contrast, was like the guy you would overlook if trawling on Tinder but who, once you met his extended family (Tumbler Ridge, Liard Hot Springs) and explored his great qualities (squished the Beatton mud between your toes; looked over the Peace Valley; got to know all the reliable, creative people), you realized it was a solid partner to raise your kids with.

But back to Tassie. The signs that summer was over were evident. The red lichen on the rocks seemed to fade, there were fewer birds of some species, our morning walks began in the dark, and most of all, the beach chairs I bought at the Reject Shop in January for $15 each had a price tag of $3.75 on the remaining two. Nonetheless, I was reluctant to leave Tasmania for the warmer temperatures of Western Australia and the Northern Territory. At this stage in my life I’m not looking for the guy in the flashy convertible, i.e. the intoxicating grandeur of the Rockies or the outstanding starkness of the desert  – I want the solid, reliable type: interesting history, good food to share, cute animals (I have never encountered a snake or croc in the wild in Australia), and the occasional thrill of crashing waves. Until the next landscape comes along…

Over less than 3 months we were grateful to have had 20 visitors in St Helens. (Embarrassingly for someone who abhors inappropriate apostrophes, I have been inserting one in St Helens when it does not have one.) We feel we deserve a commendation from the Tasmanian tourism board. A Mackey family friend from Melbourne was our first visitor and then a couple who are also long-time Mackey family friends bookended our time there. Friends from Fort St John had travelled the furthest (although they hadn’t travelled to Tassie only to see us). My sister and her family from Vancouver and Paul’s brother and family from Melbourne constituted the biggest group (9 in all – lots of logistics). 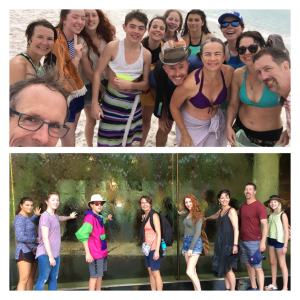 I was very happy to be able to show some of my family members parts of Australia I love. We were fortunate to have super weather for their visit and do activities ranging from yoga to bushwalking to touring museums and National Trust sites to relaxing on beaches. They were all very flexible regarding, at times, frenetic itineraries and changing accommodation (thank you to the numerous friends and family we imposed upon along the way: Noelle, John, Adam, Adrian and Suzanne, Chris and Marg, Peter and Bronwyn, Simon and Mel). Travelling from Melbourne to spend one night, my friend Leesa narrowly lost the title for shortest visit to St Helens when Phil and Chris from South Australia stayed less than 12 hours.  My brother-in-law Simon holds the record for most St Helens oysters and most Peanuts Galore consumed. 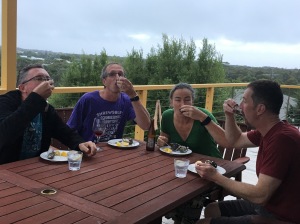 We relished the opportunity to be the hosts rather than the hosted.

Paul is getting prepared for his stint at Katherine Hospital beginning in May. It will be quite the contrast going from the gentle rhythms of a solo practice in a quiet seaside town to the hustle and bustle of emergency and the operating room in a remote community. Well, apart from the guy who hobbled in the door at Scamander with a chainsaw injury to his leg that, fortunately, was “minor” enough Paul could repair it on site. The one constant is the administrative burden. He has had to complete countless modules on topics such as Fire Safety (29 power point slides) Hand-Washing (39), Aggression Minimization (32 slides) and many more. An easy solution to this last one. Maybe fewer slides!

He has worked hard at Scamander to try and build a foundation for the practice so that subsequent locums have detailed charts and summaries to draw on for each patient so patients don’t have to tell their whole story each time. In a short time, he has had the pleasure of learning the life stories of an eclectic group of people and hopes he has helped a few of them. However, the practice population is marginal and not really enough to support a full-time practice so his concern is that it may not last. Time – something that is terribly undervalued and unsupported in health care – was an important thing he was able to provide (because he was paid a fixed salary and it was relatively quiet). 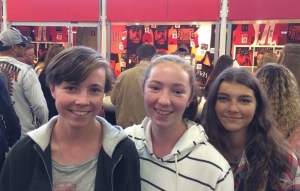 For our last week, the girls stayed up in Melbourne as there didn’t see a lot of point flying them back to St Helens for just a week. They were kindly housed, first by their Uncle Adam down at McCrae then by the Northcote Mackeys who spoiled them rotten by taking them to the Twenty One Pilots concert. They very much enjoyed spending time with their cousins (both Canadian and Australian) as they have been missing people their own age and have, understandably, been a little lonely (and a little tired of their parents) at times

Before we reach Katherine we will be spending some time with friends in Western Australia then heading to the World Rural Health Conference in Cairns. Paul will be getting there (in part) by catching the (4 day) train from Perth to Sydney with his Dad and his partner Sandra. For some reason the girls weren’t interested in this option. Paul thinks they’re nuts to pass up on this epic opportunity. They share the same opinion of their father.

11 thoughts on “Nuts in Paradise”