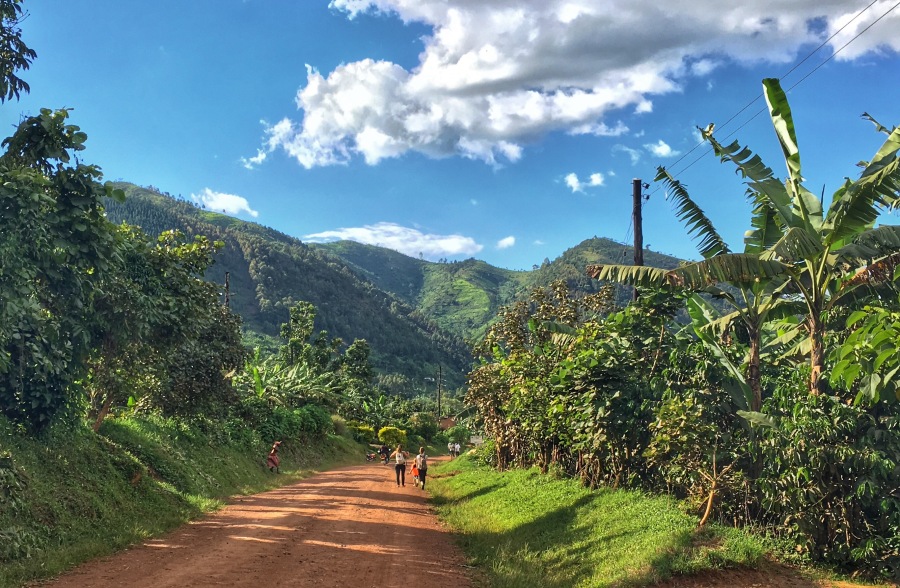 After our morning of mud hut building, I think it took a week for me to get the mud out from under my finger and toe nails! Last Sunday we did the Batwa Experience, which involved hiking up a steep hill to learn how the Batwa had lived in the rainforest. We saw the homes they built, the snares they set, and the dances they performed.

As mentioned in the previous post, in 1991 the Batwa were evicted from Bwindi National Forest to try to help protect the mountain gorilla population. The Batwa were not given land initially and have suffered many health problems as well as discrimination after they were displaced. They are between 4 and 5 feet tall and there are various theories as to why they evolved this way including less UV light in the forest therefore less vitamin D and poorer bone growth or simply that small stature was advantageous for climbing trees and moving through the forest.

Bananas are a staple here and are eaten fresh or cooked and mashed as well as fermented for beer. A potentially devastating problem over the past few years is banana xanthomonas wilt – a bacteria that causes the plant to wilt or to ripen prematurely and rot away. It is a concern in this area. A lot of tea is also grown around Buhoma as well as some coffee. Coffee is more lucrative; we were told that 10 kg of fresh tea leaves brings only $1 and it is all hand-picked.

For some reason I have been more homesick in Uganda. Perhaps it is just a function of how long we have been travelling or perhaps it is because we had a bit more of a bubble in previous places. Here our daily walk takes us through the heart of the village and past people’s homes, work, and schools. Rachelle had a sweet interaction when one of the girls we regularly pass as she walks to school and we walk to breakfast handed Rachelle a beautifully written letter wishing us a Merry Christmas and asking what are names are and where we are from. Rachelle wrote a nice letter in return.

Paul has continued to help during surgeries when possible and complete the list of OR inventory. Whereas at Karanda I spent most of my days in the pharmacy department, there are fewer prescriptions to fill and more staff in the dispensary at Bwindi Community Hospital (BCH). BCH has a nicely integrated computer system so the patient vital signs, preliminary diagnoses (including mid-upper arm circumference for children to assess nutrition status), and even whether the individual regularly uses a mosquito net are listed on the computer record along with the prescribed medications by the medical officer or physician. There is no pharmacist or pharmacy technician at BDH but the nurse dispensers are excellent. Once the nurse has dispensed the prescribed medications, the list is printed out and stapled in the patient’s book. If an infant is treated for diarrhea, the nurses spend time educating the parents about sanitation. Plumpy Nut for malnutrition is dispensed from the pediatric ward rather than the dispensary and again the nurses do a lot of education about infant nutrition and even how to grow a garden to obtain a range of foods. I had wrongly assumed that the medications used in Uganda would be similar to those in Zimbabwe. While the same little plastic bags are used for dispensing, there are certainly some differences in drug usage. There is less counting for pharmacy staff as more medications are supplied in strip packaging. Most of the antibiotics are the same but at BCH the anti-HIV medications are dispensed from a separate location to promote confidentiality. As for all patients, there was no confidentiality at either of the two hospitals in Zimbabwe for patients picking up anti-HIV medications but perhaps that lessens the stigma of being HIV-positive if it is just treated as another chronic illness. I can’t really decide which is better. Karanda had some steroid inhalers but a salbutamol inhaler is the only inhaled option for asthma or COPD at BCH. As a guide for the nurses, I compiled a table of timing of oral antimicrobials and notable drug interactions and am working at updating the BCH Antibiotic Policy. I have given two pharmacology lectures at the nursing school but get nervous and go through the material too quickly and end up dismissing class early.

On Thursday morning Paul and I watched the Patriotism Parade. During the week over 100 staff and community members had been attending classes before and after work on Ugandan history and the vision for 2040, as well as learning marching drills. It was quite moving to watch the drills and listen to the oaths the individuals recited echo off the chartreuse green hills. Thursday afternoon the four of us watched a local youth community development group do some traditional dances – we hear the drumming each afternoon so we felt compelled to go watch. The boys were fantastic singers, dancers, and drummers. It is difficult as there are many groups locally doing good work and requesting sponsorships and funding. We are even trying to spread our souvenir buying out over as many people as possible.

The girls and I have been trying to help out a bit at Redemption Song Foundation. Wendee is fundraising for a community water tap stand for a Batwa village and the girls have been posting the Instagram messages. 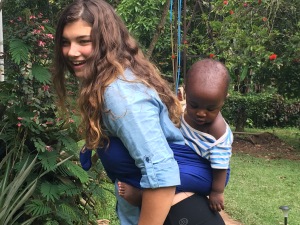 It is encouraging to see how healthy the children who come to the weekly soup kitchen are compared to the norm. The love Wendee has for the kids is genuine and translated into practical caring. Seeing jiggers dug out of feet still distresses me. On Friday night we had a lovely supper at Wendee’s– her staff served pork with groundnut sauce, cooked plantain, potatoes, and rice balls coated in cassava flour and fried. I need to source some more of those or learn how to make them. After supper we watched the first Lord of the Rings, which seemed surreal when we had been thinking earlier in the week that the Batwa would be good Hobbits. Not to mention that we feel like we are living on the edge of Mirkwood when we look off our deck in the mornings.

We had not been using the boda bodas (motorbikes) for transport but 10 pm seemed too late to walk the 3 km home. Wendee knows some reliable drivers and once I stopped imagining crash scenarios, the ride back to our accommodation was actually magical. Three to a bike did not feel too crowded. The sky was completely filled with stars augmented by sheet lightning and fire flies flitted by closer to ground. The insect and frog sounds of the night and alternating warm and cool air surrounded us. We arrived safely at the top of our driveway, the silhouette of the ‘Misty’ mountains overlooking us. 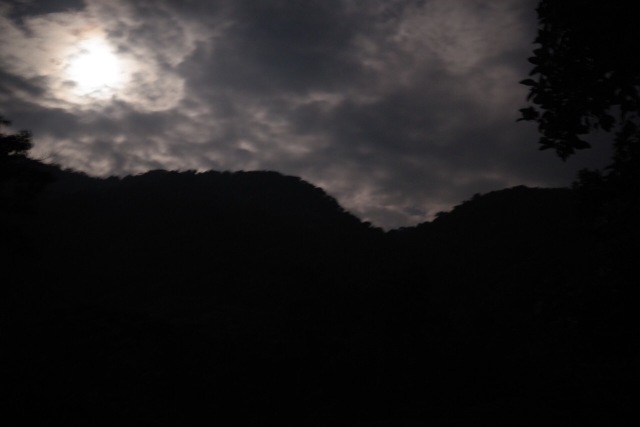 7 thoughts on “Mind the Boda Boda”