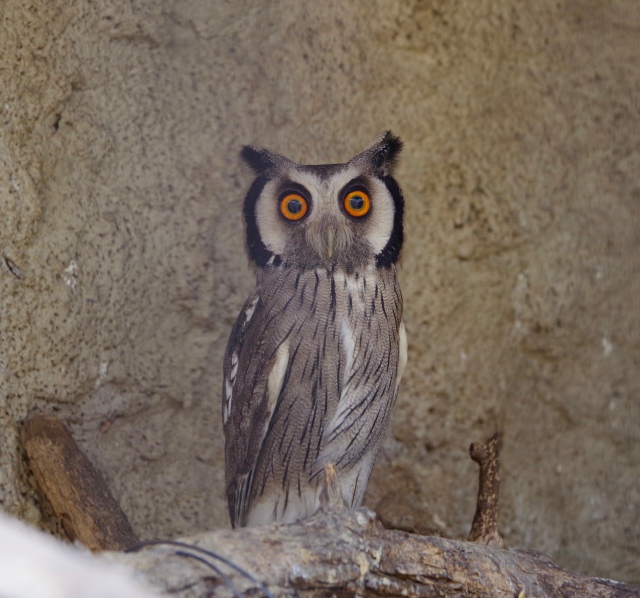 The last few days have me searching for appropriate adjectives. Harare was no less overwhelming the second time we were exposed to it – so many people desperately trying to scrape together some money selling produce and other items beside the main highways and even in the middle of the city streets. Our unflappable driver Tafadzwa (we keep getting tempted to ask him to do something outrageous such as a moon landing to see if he will still respond ‘No Problem’) took us to the local bird park this time and we were awed by the size of some of the birds and the initiative of the owner to continue to care for injured and endangered birds in the face of great financial challenge. That evening our hosts – who publish a quarterly magazine ZimArtist – took us to an exhibition by several local artists. The convivial event felt a planet away from the seething streets of downtown Harare. Paul met David Filer, who is renowned world-wide for his realistic pencil drawings of African wildlife (www.davidfiler.com). We also especially enjoyed the paintings by a woman who had every Zimbabwe bank note printed since 1980 as her background canvases with a local cow or steer painted overtop (‘cash cows’ – a telling statement). En route back home, our hosts drove us past the road that is closed every evening at 6 pm and reopened at 6 am and obsessively guarded by the army because Mugabe’s town house is down it, although he rarely stays there.

Our experience upon arriving in the Johannesburg airport was a serious deterrent to South African tourism. After enduring almost two hours of a glacially slow line-up, we arrived at the understaffed Immigration counter to be promptly whisked away to a back room because we did not have unabridged birth certificates for Rachelle and Thea. We somehow managed to surmount this hurdle despite our earnest answers to the random questions we were asked frequently being misunderstood (‘Let the girls answer – when are you leaving South Africa?’ ‘When Dad tells us.’). A further wait to transfer our checked bags and a diversion by someone trying to make some quick cash meant we arrived at our gate for our next flight just as boarding commenced.

However, pampering in terms of amazing food and home comforts from our friend Hillary at Cypress Cottage B & B more than compensated for previous stresses. Graafe-Reinet is the fourth oldest settlement in South Africa and is an esthetic mix of Dutch Karoo, Dutch Cape, Victorian, and Georgian architecture.

Hillary toured us around local sights such as the large, important fossil collection at her sister and brother-in-law’s merino farm that has been in his family for five generations; the diverse art at New Bethesda (think Nelson, BC, with less water) including the quirky glass and concrete sculptures of Helen Martins, the intricate tapestries by local textile artists, and the sculptures of Franz Bookoi;

followed by a drive through the Cambaroo Game Reserve where we saw kudu, eland, baboons, vervet monkeys, tortoises, zebra, springbok, and a secretary bird.

We finished with a drive up to view the Valley of Desolation (possibly not desolate, just a little lonely and misunderstood) and a traditional S African braai for supper. 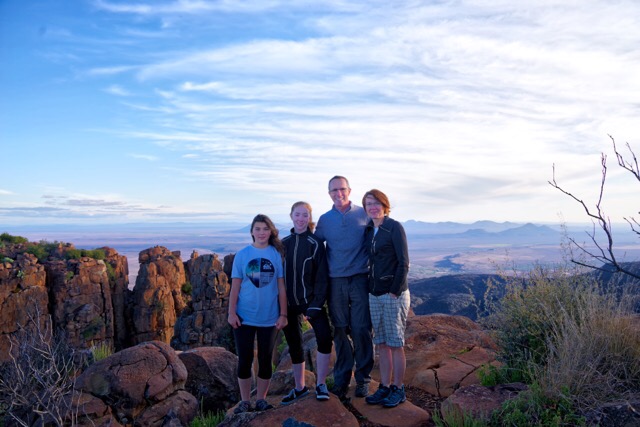 The following morning Hillary graciously invited Lori to join her with her friends for their daily walk at 5:30 am, which provided stark views as the sun rose, and an opportunity for a last conversation.

Saying good-bye to Hillary was difficult as we don’t know when we will meet up again but we were so pleased we were able to fit in the visit. On our way to Paarl from Graafe-Reinet we drove the circular route at the Karoo National Park, somewhat reminiscent of parts of Arizona with the added bonus of ostrich, zebra, kudu, and a helmeted guinea fowl (the only bird apart from the common ostrich we could reliably identify). The remainder of the drive felt like a 300 km-long game of chicken at times, with us getting passed regularly on solid lines with oncoming traffic despite us adhering to or exceeding the 120 km speed limit. The iridescent green irrigated fields and wineries of the West Cape were a shock to the eyes after the terracotta dust of Zimbabwe and the subtler earth tones of the East Cape. The situation in the two countries is vastly different. Our impression so far is that there is less unemployment and desperation, more productive agriculture, better roads and more infrastructure in South Africa versus Zimbabwe. Nonetheless as in Zimbabwe the gap between rich and poor is still vast, many have no access to healthcare and their housing is grossly inadequate, and many children do not get enough to eat. I think it was helpful to be introduced to the harsher reality of Zimbabwe before South Africa because my expectations for Zimbabwe would have been higher had we come to South Africa first.

We were generously hosted overnight in Paarl by the Klompjes, who provisioned us well before we left early for Cape Town. 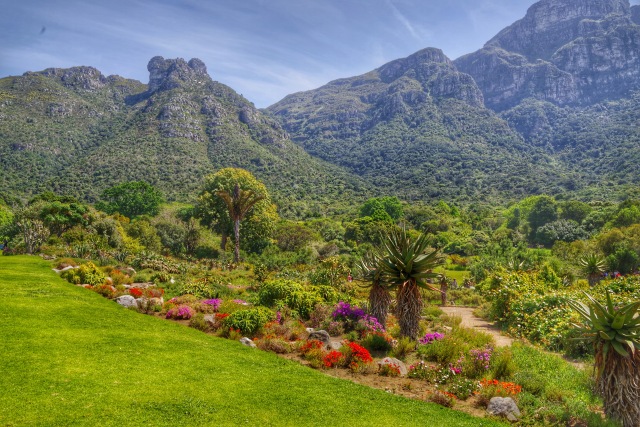 The Kirstenbosch Gardens in Cape Town are absolutely incredible. We learned so much in our hour and a half tour. A particular highlight for me was the Boomslang pedestrian bridge to view the tree canopy. That afternoon we caught the cable car up Table Mountain and the Potgieters, who used to live in Fort St John and moved back to South Africa almost 5 years ago, managed to meet up with us up top. We had a super Mexican dinner with Eira Palme, who used to babysit our girls many years ago in Fort St John. She made the protests at South African universities real for us as she described studying hard for an exam the previous day only to be prevented from entering the university by the activists. Eira joined us for the beginning of the ‘safari-music tour’ – a house concert opened by Digby and the Lullaby followed by Mick Thomas and Squeezebox Wally. So much fun.

Our brief dip into South Africa was closed out by a visit to Robben Island which serves as a monument to the long struggle against apartheid (the foundations of which were introduced in 1948). Unfortunately recent trends in Europe, the US and Australia seem all too similar. The guides all served time as prisoners so their descriptions of the conditions were brutally honest and heart-wrenching. Sobering. 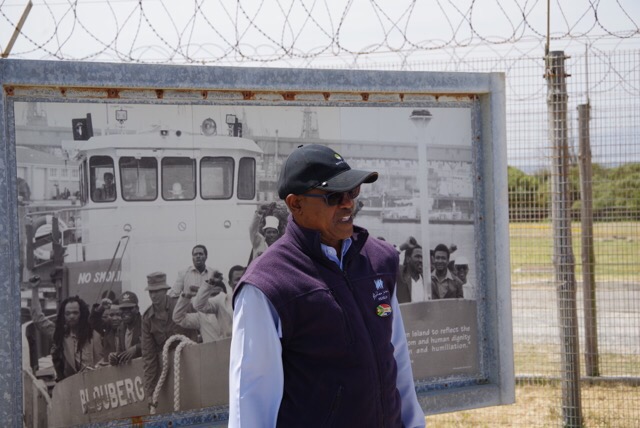 4 thoughts on “Art and Animals”